The Shrike is a being of incredible power and strength, and of dauntingly imposing appearance, although of uncertain origin or motive. It is a character and literary device of paramount importance to the Hyperion Cantos universe, appearing on all books of the saga. Initially introduced as the stuff of legends in the planet of Hyperion, the monster goes on to enter the narratives of each major character of the saga. It plays major roles in both individual story lines and in the major arc of human history as told by the Cantos.

The Shrike derives its moniker from the family of Old Earth birds of the same name, which are known for impaling their prey on the thorns of trees. Much like its namesake, the Shrike has a special "tree" for its victims: a vast, artificial tree-like armature made of a substance resembling chrome steel and studded with three-meter-long thorns, known as The Tree of Pain. When the Shrike chose to impale victims on the thorns, they would not die, but rather continue living while experiencing the full physical pain of impalement. Countless individuals - possibly numbering in the thousands or millions - have been taken by the Shrike and impaled on this tree, including Martin Silenus and his patron, Sad King Billy.

The Shrike itself is a roughly humanoid entity three meters in height, with a carapace made entirely of a metal resembling chrome steel. It has four arms, with the lower pair being slightly shorter than the upper pair, and four hands tipped with scalpel-like fingerblades. Its body is covered with an array of blades and thorns, including a large curved thorn on its chest, a curving blade on its forehead, another higher up on its head, and rosettes of thorns around its limb joints. Its eyes are multi-faceted and give off a vivid red glow, and its mouth contains multiple rows of sharp metal teeth. The creature was feared among the citizens of Hyperion, where it lived during the time of the Hegemony.

The Shrike travels through The Void Which Binds. It uses the Void to perform true farcasting through space and time - which is accomplished by merging with the Void (similar to Aenea's freecasting) instead of tearing it (similar to the way farcasters work). It is therefore capable of vanishing and reappearing instantly anywhere and at any point in time, although for most of its recorded existence it does not do so outside of a small territory on the planet Hyperion. It is also capable of movement in fast time, which enables it to slaughter or capture its victims before they can resist. Often the Shrike attacks so quickly that it cannot be seen, or appears to be in multiple places simultaneously.

Its time-traveling abilities notwithstanding, the Shrike is a formidable combatant. Its many thorns and blades allow it to effortlessly eviscerate and dismember virtually any opponent, and it often chooses to do so in an extremely gruesome and painful manner. It is also nearly invulnerable to damage: conventional weapons have absolutely no effect on the creature, and it can even withstand being submerged in molten rock. The only instances where the Shrike is known to have taken damage are when it was fought by Fedmahn Kassad, when its carapace was damaged by Rhadamanth Nemes, and when it was apparently finally destroyed by Brawne Lamia.

One of the Shrike's most terrifying abilities - at least to the Catholic Church during the Pax Era - is its ability to remove a cruciform from the body of its host, thereby preventing the host from being resurrected. This is widely believed to be impossible, as the cruciforms extend tendrils throughout their hosts' entire bodies and will re-constitute their host as long as even a tiny amount of cruciform material and host tissue remains. When removed by the Shrike, however, these tendrils wither and disappear, leaving the host without any trace of cruciform left in their body.

The precise origins of the Shrike are unclear. It is known that it will be created at a point in the galaxy's distant future, although by whom, and for what purpose, remains ambiguous. Once it was suggested that it was created in the far future by the TechnoCore's Ultimate Intelligence, but at a later point Aenea says the faction of the TechnoCore known as the "Reapers" will create it in the far future. According to Aenea, after Fedmahn Kassad's fight with the Shrike in the far future, the Reapers will use the violent and soldier aspects of Fedmahn Kassad's personality and DNA, then mutate, twist, and incorporate them into forging the Shrike. Aenea also claims that the Shrike does not hold any specific allegiance or motive of its own, but is more of a pawn, designed to act as the Avatar of the TechnoCore Ultimate Intelligence, the Human Ultimate Intelligence, and the Lions and Tigers and Bears at different times and for different purposes.

The variable nature of the Shrike's origins may be due to the nature of time itself: it is stated by the AI Ummon that the future is fluid, constantly changing based on current events. As such, exactly who will create the Shrike in the future may be indeterminate; all that is certain is that it will be created, and it will go on to play a pivotal role in galactic history.

The presence of the Shrike on Hyperion was the starting point of some religious changes in the Hegemony. TheChurch of the Final Atonement is based around the reverence of the Shrike, which they call the "Avatar" and the "Lord of Pain". The Shrike Church, as it was also known, gained more and more followers, but by the time the Hyperion system was attacked by the TechnoCore disguised as Ousters, riots started against the Church, their temples on Hyperion were destroyed and their priests persecuted. After the attacks against the WorldWeb, the popularity of the Church had risen again; people saw the war as punishment against humankind.

During his expedition to Hyperion to study the Bikura, Father Paul Duré of the Catholic Church encountered the Shrike in the planet's labyrinths.

While fighting Ousters on Hyperion, Colonel Fedmahn Kassad encountered Moneta, a woman who he had previously known only from battle simulations during his training and developed a romantic relationship with. While they made love on the battlefield, Moneta apparently transformed into the Shrike, nearly killing Kassad.

After moving to Hyperion with his patron, Sad King Billy, Martin Silenus seemingly brought the wrath of the Shrike on the population of the City of Poets while he worked on his epic Hyperion Cantos. The Shrike gruesomely killed numerous civilians in the area, causing the city to be evacuated. Believing that Martin's work had somehow summoned the monster, Billy attempted to burn the manuscript of the Cantos, only for the Shrike to appear and take Billy away to its Tree of Pain.

Rachel Weintraub, an archaeologist studying the Time Tombs on Hyperion, encountered the Shrike during a temporal anomaly inside the Sphinx. When she was recovered following the event, she was found to have contracted a inexplicable condition labeled "Merlin Sickness": her body was now aging in reverse, and with each passing day, a day's worth of her memories would be erased. Her father, Sol Weintraub, traveled across the galaxy with his daughter to find a cure for her condition.

Not only did the Church of the Final Atonement see the arrival of the Shrike as retribution against mankind, the Templar Brotherhood also did. The True Voice of the Worldtree Sek Hardeen shared in the opinion and sent Het Masteen to the last pilgrimage on Hyperion with an erg to pilot the Tree of Pain as a Treeship.

During the Fall of the Hegemony, Brawne Lamia entered the Shrike Palace and was transported to the same time as the Shrike's victims stored within the Palace. As Brawne attempted to rescue Martin Silenus, the Shrike appeared and confronted Brawne. Brawne, through abilties that she nor anyone else knew existed, was then able to apparently destroy the Shrike by turning it into a crystalline form and shattering it.

While the Shrike was destroyed by Brawne Lamia, its time-traveling abilities meant that this did not necessarily preclude it from appearing at some future time or place in the galaxy. Indeed, the Shrike would play a central role in galactic events over 300 years later.

After the Fall of the Hegemony of Man, the Shrike did not make an appearance for over three centuries. It finally reappeared when Aenea arrived in the present through the Sphinx's portal from the past, defending her against the Pax forces that had been preparing to apprehend her.

The Shrike appeared again on God's Grove when Aenea and Raul Endymion farcasted there from Qom-Riyadh. It then engaged Rhadamanth Nemes in single combat during her attempt to kill Aenea. The two combatants were fairly evenly matched, but the Shrike was removed from the fight when Nemes used a "sphinx card" - a temporal displacement device engineered by the TechnoCore - to shift the Shrike into the future for a span of five minutes.

One of the Shrike's final appearance is during the funeral for Martin Silenius on Old Earth, where it remains like a statue standing as a sentry over the grave site. 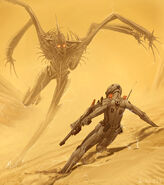 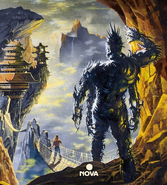 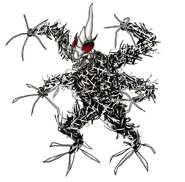 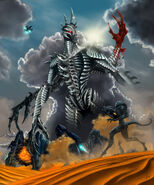 The Shrike
Add a photo to this gallery
Retrieved from "https://hyperioncantos.fandom.com/wiki/Shrike?oldid=6961"
Community content is available under CC-BY-SA unless otherwise noted.